Infographic: Visualizing All the Metals for Renewable Tech 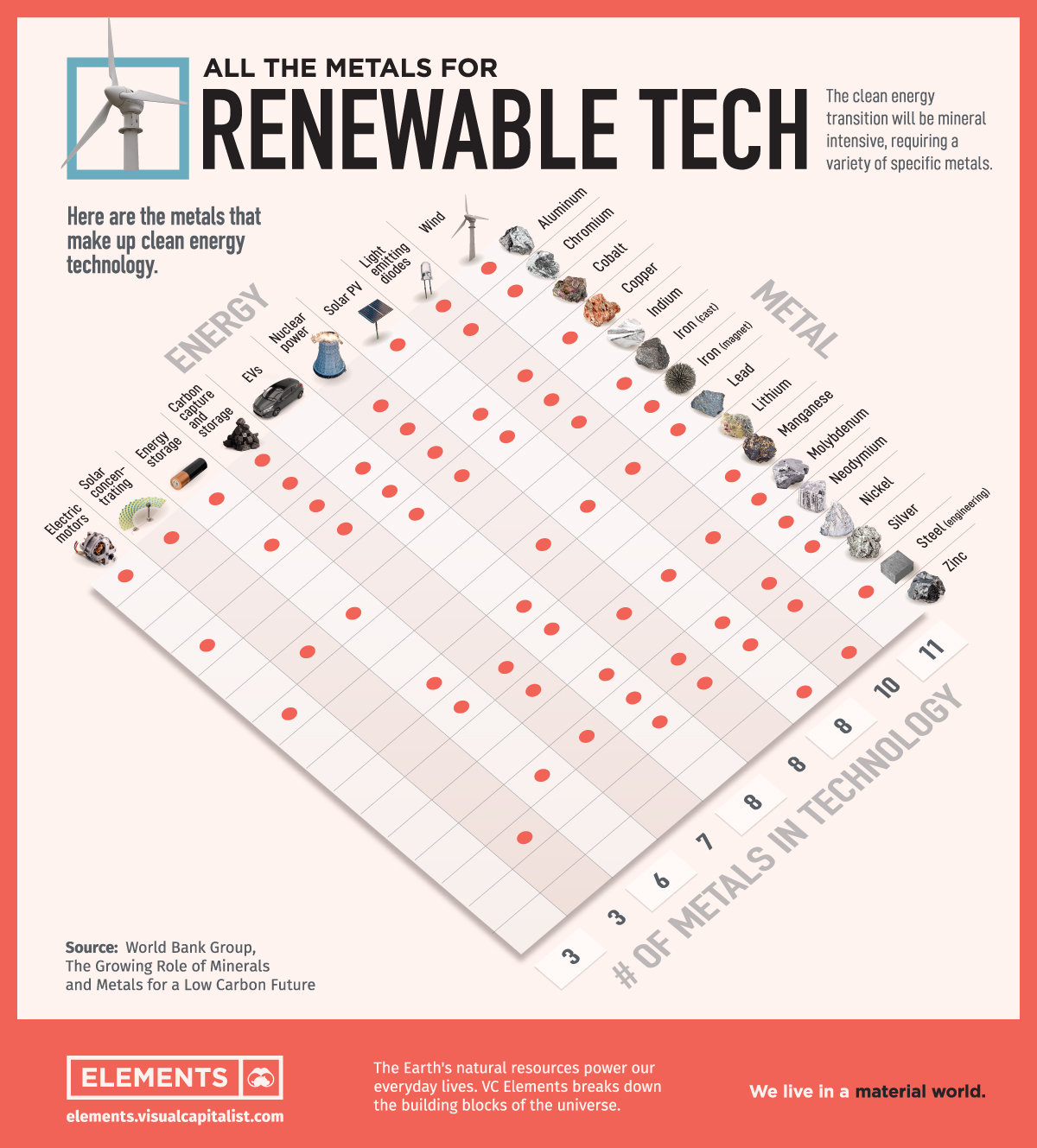 The energy transition will be mineral intensive and create massive demand for all the metals in renewable tech. Electricity from renewable technology grew at the fastest rate in two decades in 2020, according to a report from the International Energy Agency (IEA).

Consequently, as the pace of the energy transition gains further momentum, the demand for metals will increase. But which ones?

As shown above, the graphic takes data from the World Bank’s Climate Smart Report outlines what metals each renewable technology will require and their overlapping uses.

All the Metals for Renewable Tech

According to the IEA, the number and amount metals used vary by technology. Lithium, nickel, cobalt, manganese and graphite are important for battery performance, durability, and energy density. Rare earth elements are in the permanent magnets that help spin wind turbines and EV motors.

In particular, a typical electric car requires six times the minerals of a conventional car, and an onshore wind farm requires nine times more minerals than a gas-fired power plant with a similar output. Electricity grids need massive amounts of copper and aluminum, with copper being a keystone for all electricity-related technologies.

Inevitably, more mining must happen to provide the minerals for a renewable energy transition. According to the IEA, reaching the goals of the Paris Agreement would quadruple mineral demand by 2040.

Eventually, a rapid increase in demand for minerals will create opportunities and challenges in meeting sustainability goals. There is a lack of investment in new mine supply which could substantially raise the costs of clean energy technologies.

In fact, the mining industry needs to invest $1.7 trillion over the next 15 years to supply enough metals for renewable tech, according to consultancy Wood Mackenzie.

However, the mining industry is not ready to support an accelerated energy transition. While there are a host of projects at varying stages of development, there are many risks that could increase supply constraints and price volatility:

In addition, some nations are in a better position than others to secure the metals they need for renewable technologies. Attaining these new sources will be vital and valuable for a clean energy future.

Originally published at Visual Capitalist at this link.