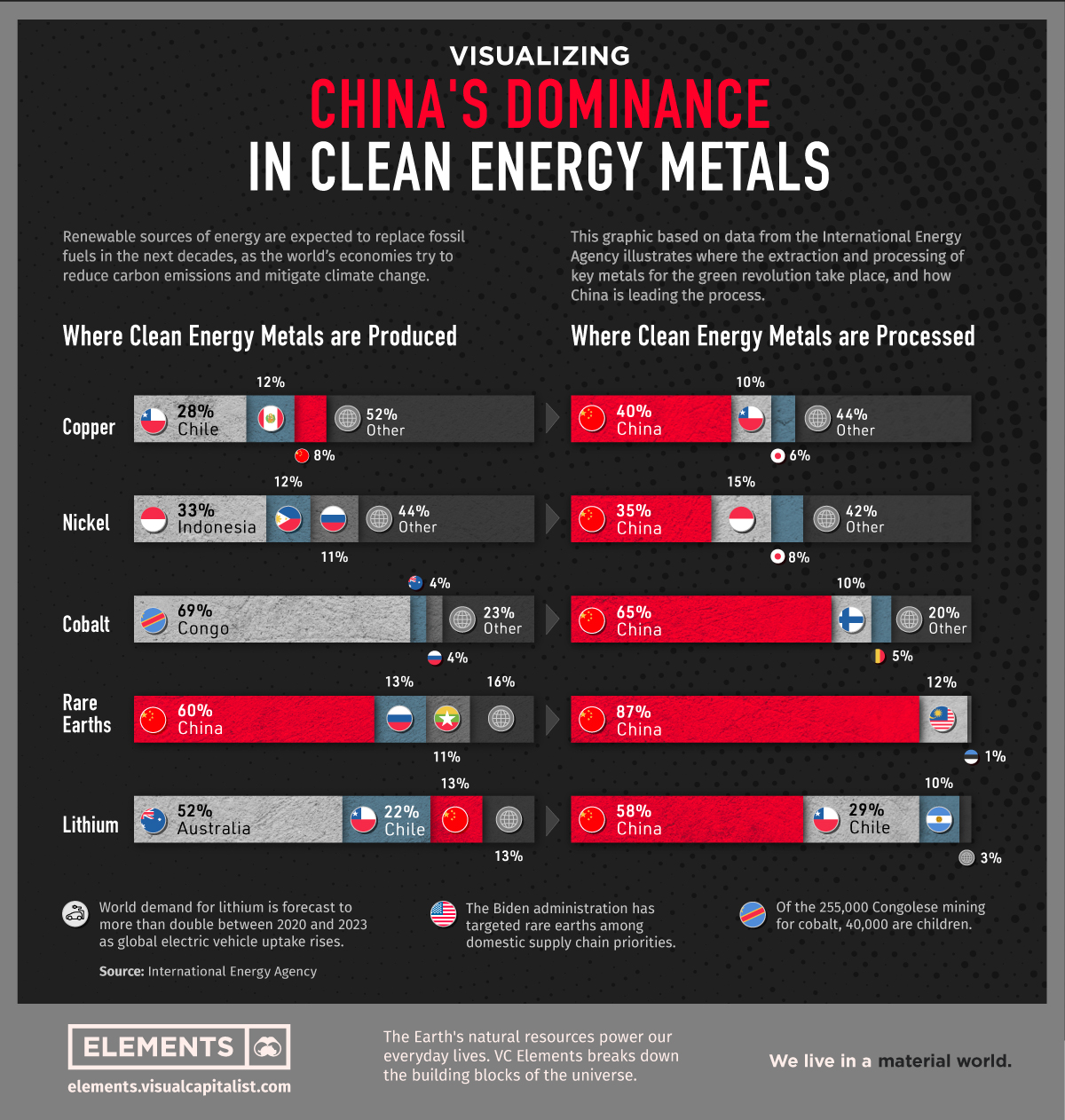 Renewable sources of energy are expected to replace fossil fuels over the coming decades, and this large-scale transition will have a downstream effect on the demand of raw materials. More green energy means more wind turbines, solar panels, and batteries needed, and more clean energy metals necessary to build these technologies.

Today’s graphic, based on data from the International Energy Agency (IEA), illustrates where the extraction and processing of key metals for the green revolution take place.

It shows that despite being the world’s biggest carbon polluter, China is also the largest producer of most of the world’s critical minerals for the green revolution.

Where Clean Energy Metals are Produced

China produces 60% of all rare earth elements used as components in high technology devices, including smartphones and computers.

The country also has a 13% share of the lithium production market, which is still dominated by Australia (52%) and Chile (22%). The highly reactive element is key to producing rechargeable batteries for mobile phones, laptops, and electric vehicles.

But even more than extraction, China is the dominant economy when it comes to processing operations. The country’s share of refining is around 35% for nickel, 58% for lithium, 65% for cobalt, and 87% for rare earth elements.

Despite being the largest economy in the world, the U.S. does not appear among the largest producers of any of the metals listed. To shorten the gap, the Biden administration recently launched an executive order to review the American strategy for critical and strategic materials.

It’s also worth noting that Russia also does not appear among the top producers when it comes to clean energy metals, despite being one of the world’s leading producers of minerals like copper, iron, and palladium.

While China leads all countries in terms of cobalt processing, the metal itself is primarily extracted in the Democratic Republic of Congo (DRC). Still, Chinese interests own 15 of the 17 industrial cobalt operations in the DRC, according to a data analysis by The New York Times and Benchmark Mineral Intelligence.

Unfortunately, the DRC’s cobalt production has been criticized due to reports of corruption and lack of regulation.

Part of the Congolese cobalt comes from artisanal mines with low regulation. Of the 255,000 Congolese artisanal miners, an estimated 40,000 are children, some as young as six years old.

The Rise of Clean Energy Metals

The necessary shift from fossil fuels to renewable energy opens up interesting questions about how geopolitics, and these supply chains, will be affected.

In the race to secure raw materials needed for the green revolution, new world powers could emerge as demand for clean energy metals grows.

For now, China has the lead.