All the Metals We Mined in One Visualization 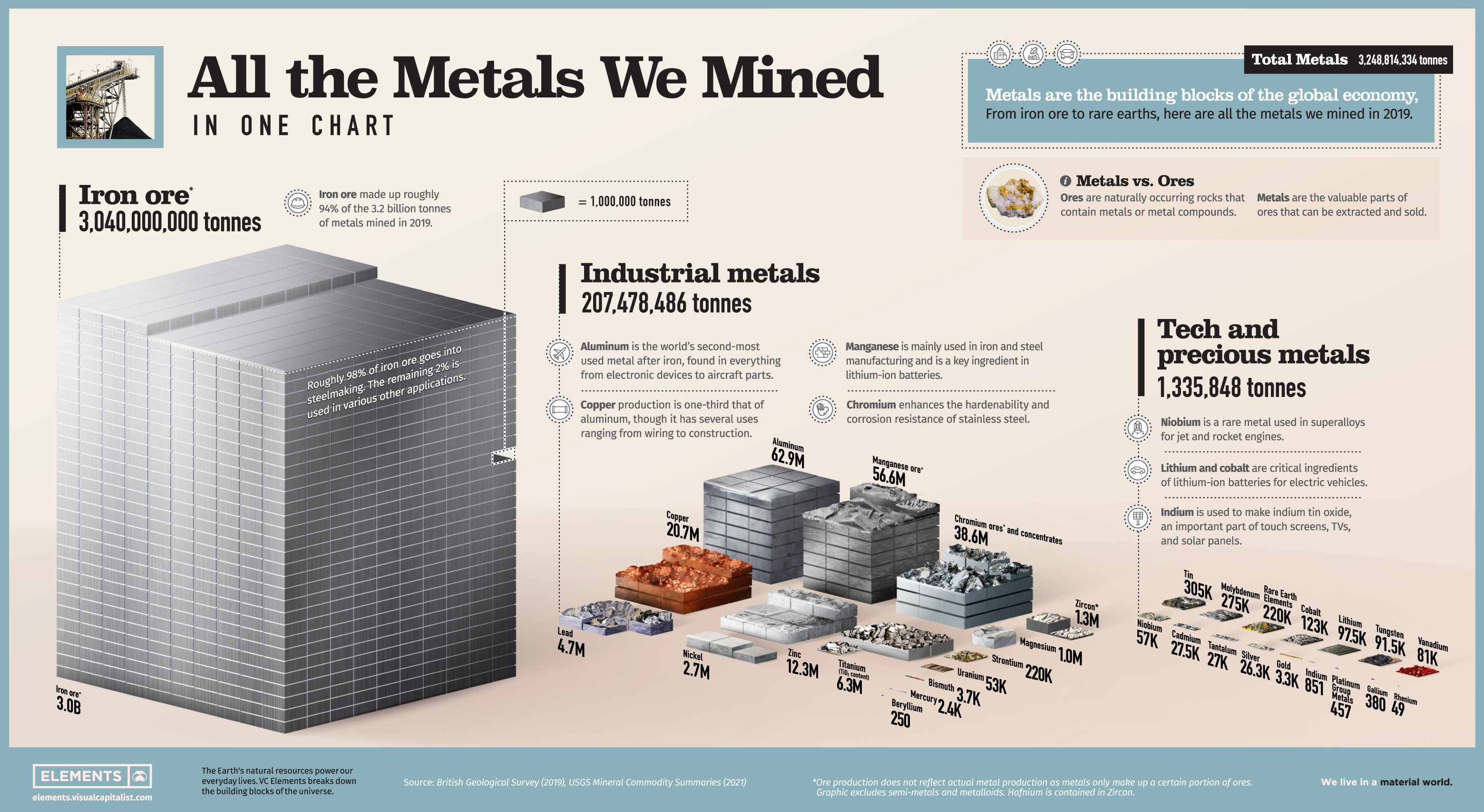 Metals are all around us, from our phones and cars to our homes and office buildings.

While we often overlook the presence of these raw materials, they are an essential part of the modern economy. But obtaining these materials can be a complex process that involves mining, refining, and then converting them into usable forms.

So, how much metal gets mined in a year?

Before digging into the numbers, it’s important that we distinguish between ores and metals.

Ores are naturally occurring rocks that contain metals and metal compounds. Metals are the valuable parts of ores that can be extracted by separating and removing the waste rock. As a result, ore production is typically much higher than the actual metal content of the ore. For example, miners produced 347 million tonnes of bauxite ore in 2019, but the actual aluminum metal content extracted from that was only 62.9 million tonnes.

Here are all the metals and metal ores mined in 2019, according to the British Geological Survey:

Miners produced roughly three billion tonnes of iron ore in 2019, representing close to 94% of all mined metals. The primary use of all this iron is to make steel. In fact, 98% of iron ore goes into steelmaking, with the rest fulfilling various other applications.

Industrial and technology metals made up the other 6% of all mined metals in 2019. How do they break down?

From construction and agriculture to manufacturing and transportation, virtually every industry harnesses the properties of metals in different ways.

It’s no surprise that aluminum is the most-produced industrial metal. The lightweight metal is one of the most commonly used materials in the world, with uses ranging from making foils and beer kegs to buildings and aircraft parts.

Manganese and chromium rank second and third respectively in terms of metal mined, and are important ingredients in steelmaking. Manganese helps convert iron ore into steel, and chromium hardens and toughens steel. Furthermore, manganese is a critical ingredient of lithium-manganese-cobalt-oxide (NMC) batteries for electric vehicles.

Although copper production is around one-third that of aluminum, copper has a key role in making modern life possible. The red metal is found in virtually every wire, motor, and electrical appliance in our homes and offices. It’s also critical for various renewable energy technologies and electric vehicles.

Technology is only as good as the materials that make it.

Technology metals can be classified as relatively rare metals commonly used in technology and devices. While miners produce some tech and precious metals in large quantities, others are relatively scarce.

Tin was the most-mined tech metal in 2019, and according to the International Tin Association, nearly half of it went into soldering.

Given their rarity, it’s not surprising that gold, silver, and platinum group metals (PGMs) were the least-mined materials in this category. Collectively, these metals represent just 2.3% of the tech and precious metals mined in 2019.

Although humans mine and use massive quantities of metals every year, it’s important to put these figures into perspective.

The world’s appetite for materials is growing with its population. As resource-intensive megatrends such as urbanization and electrification pick up the pace, our material pie will only get larger.