Why ESG Investors Are Endangering the Energy Transition

06.17.21 | Blog | By: Matt Fernley
So, before I get deluged with hate mail I should emphasise that I help run an ESG fund. I believe that ESG is important and that industries should be run with ESG at the forefront. The issue I have is that many ESG investors are extremely black and white with their attitude to primary industries and this is becoming a problem.

ESG is turning into the investment theme for the 21st Century. ESG funds have seen the largest inflow in recent history. Bloomberg data suggests that ESG funds have had over a trillion dollars of net inflows since January 2019. And they are steadily deploying that capital that they’ve raised.

But it’s where they’re deploying it that’s the problem.

When I look at the Energy Transition sectors, I see a huge build out underway.

In the EV and rechargeable battery sector, we forecast that annual EV sales will rise from three million units in 2020 to 15.6m units in 2025E and 34.6m units in 2030E. That’s a multiples-increase in market size in a relatively short period of time. And sales will continue to increase. And it’s not just car sales that will have to increase, but infrastructure (charging points) as well. 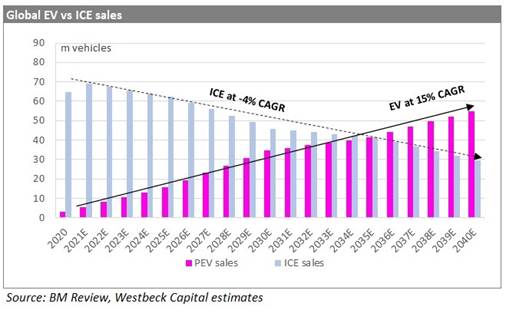 The market’s realised that and we’ve seen a huge increase in investments in the EV and battery sector over the past three years. Our calculations suggest that over US$100bn of new capital has been raised or allocated in the EV space since 2018, with a further US$55bn raised in the rechargeable battery segment. 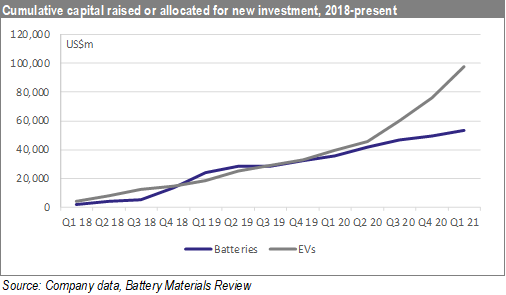 We see a similar situation in the renewable energy space. Politicians have recognised that Renewables are a way to rapidly and efficiently decarbonise and we are seeing a huge focus on adding capacity in this sector. There is the European Climate Law, which is targeting a 55% reduction in GHG emissions by 2030 and the planned US 50-52% cut by 2030. China is also toeing the line on GHG emissions, although not going quite as fast as many in the West would like.

BNEF forecasts that global solar and wind capacity installations will increase from 217GWpa in 2020 to 742GWpa by 2030, taking cumulative global installed capacity from 800GW to 4300GW. These are big numbers. 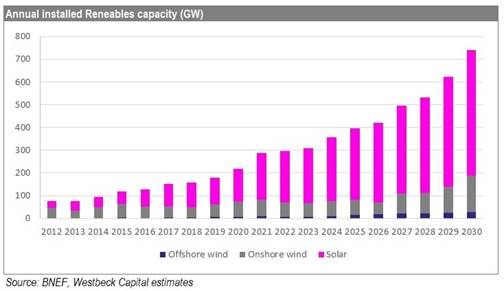 And analysts suggest that the cost of this build out will be even more significant than in EVs. Over €10tn is expected to be spent on the European Green Deal between now and 2030. Goldman Sachs estimates that US$16tn will need to be spent directly on Renewables by 2030.

These are very big numbers. But they’re ignoring one key segment which is vital to both sectors. Extractive industries.

How are we going to find enough steel, copper, lithium, rare earth elements in the world to supply industries which are set to grow by a factor of ten times?

This is where the joined up thinking breaks down.

Because the Mining industry is persona non grata to most ESG investors. I’ve sat across a table from ESG investors talking about my fund and been shown the door as soon as we mention investing in Mining. 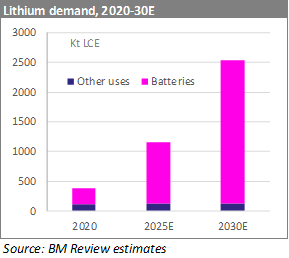 Oh, we need to recycle goes the refrain. “If we increase investment in recycling then we won’t need to invest in mining”. But the problem is – that’s not true. Take the lithium market for instance. Lithium demand in 2020 was 385Kt of LCE (lithium carbonate equivalent). In 2030E we forecast it to be 2530Ktpa of LCE. By 2030 we will be using on an annual basis more lithium than has ever been extracted up to now. And most of that lithium isn’t and won’t be available for recycling for the next 10-15 years.

Copper demand from Renewables will be 3.7Mtpa by 2030. That’s an incremental growth of c2.5Mtpa from 2020. It’s significant. 9.6 tonnes of copper is needed per MW of offshore wind, 4-5t per MW of onshore wind and solar. And, for the time being, there’s no substitute for copper. No other metal has its conductive properties. 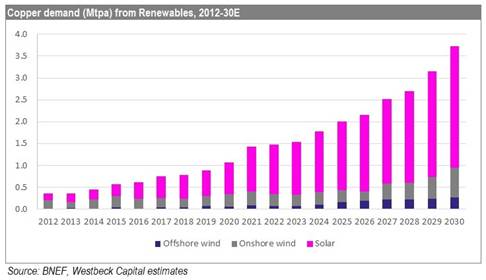 The magnitude of the build out in demand that we are seeing in these industries can only be supplied by investment in increasing primary production. Recycling isn’t going to cut it until there’s enough material in the system, and that won’t be for many years to come.

And there’s another problem. While it only takes one to two years to build an EV plant or a solar plant, it can take of the order of five to ten years from discovery to production to build a mine; often longer for a world-scale mine. That means that investors focusing only on Downstream industries are doing a huge disservice to those industries. Because lack of investment in new raw materials supply means that supply/demand gaps will develop, and prices for those materials will rise. Nowhere is this more obvious than in the EVs and batteries sector where Downstream investment is outpacing Upstream by more than five times. 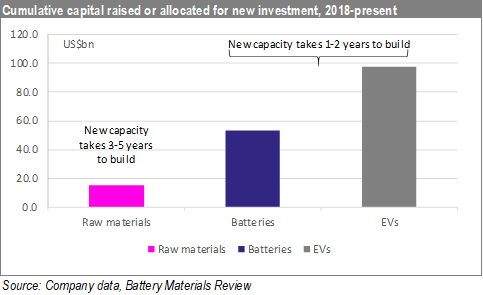 Some Miners Have Embraced ESG; Now It Has to Go Both Ways

I’ve been involved in the Mining industry for nearly 25 years now. I will admit that, when I started in the industry, ESG involved planting a few bushes outside the main office building! But it doesn’t any longer. The Industry has really pulled up its socks when it comes to ESG. While there are some companies that continue to be polluting and uncaring on the social side and exhibit poor governance, there are a lot more which realise that environmental controls, good governance, diversity and having a social license to operate are vital for the Mining industry in the 21st Century.

The industry has grown up a lot, particularly in the past five years. But I fear that many ESG investors have not. And I don’t just mean the portfolio managers making the investment decision here. It is also those that assign the mandates that need to look at what they’re doing.

When I talk about Mining a lot of people talk about the mistakes of the past. And there have been a lot of mistakes. No one in the Mining Industry is denying that.

But make no mistake. There will be no Energy Transition without the Mining Industry.

If there is no investment in new mines then prices for key raw materials will rise to such a level that building a new solar or wind plant will be uneconomic, new EVs will either be uneconomic to produce for auto companies or consumers won’t want to buy them because their price will be too high.

We’ve already had a foreshadowing of the impact that higher raw materials prices can make to the Energy Transition in the solar industry. Solar module prices have risen by over 20% this year after solar silicon prices and solar glass prices more than doubled. Solar module prices had been on a decreasing trend since 2000. This, along with higher steel prices, has already had an impact on production economics of the solar industry… Even though polysilicon and glass markets are expected to come back into balance next year, and prices stabilise, the impact of higher raw material prices has still been felt. 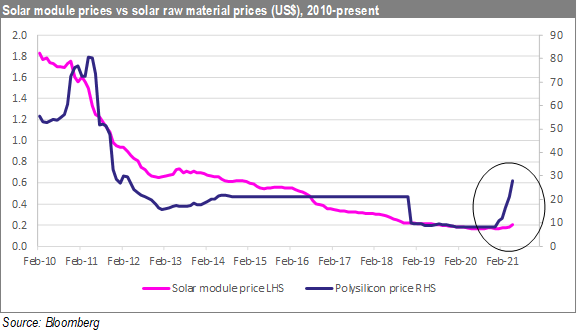 What will be the impact of that sort of rise in raw material prices on Electric Vehicles or wind? The key raw material elements in wind power are steel (in which prices are already up), copper and rare earth elements. Prices could still rise materially from here. In EVs, the whole of the battery material segment is underinvested. We’ve all seen the BNEF chart which shows the decline in lithium-ion battery prices over the past 10 years. In fact it looks very similar to the chart for solar module prices that I showed above. What happens to battery prices if battery raw material prices quadruple? Well, for me, they’re only going in one direction… 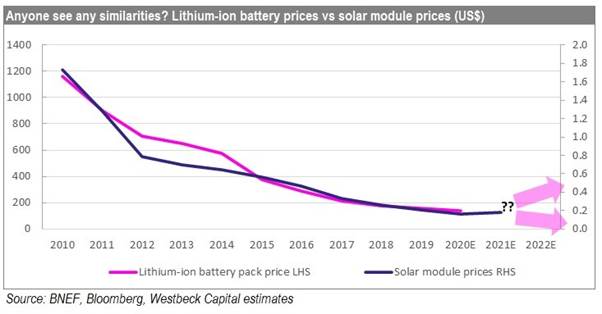 No New Supply Riding to the Rescue…

But for battery materials, rare earth elements and copper we’re simply not going to see a flood of new supply in the near-term. Because of the time required to build new metals projects, it will take years to add new capacity, even if the money is made available now. The longer the industry has to wait to raise funds, the bigger the supply/demand gap will be, and the more prices will rise.

ESG investors need to understand that without investment in primary production of raw materials, production of clean energy products may become uneconomic.

Surely it’s better to work with companies that seek to improve their industry, than allow companies with poor records on ESG to flourish in a high price environment?

And if ESG continues to refuse to embrace mining, then the Energy Transition will likely fail before it even starts. It’s a stark choice. We better hope we find the right answer.