It would be an industry several times larger than today’s oil industry. But it could soon be all that stands between the planet and climate catastrophe. As the world’s efforts to halt rising emissions of planet-heating carbon dioxide continue to falter, scientists are increasingly considering a “last resort” solution – a vast network of giant vacuum cleaners to suck the gas from the atmosphere.

It sounds insane. But the cost of such a system, first proposed in the 1990s, is reaching a level that environmental economists say makes it do-able. In a few decades – as temperatures soar and the climate approaches dangerous tipping points – technologies known as direct carbon capture may be judged better for the atmosphere than putting parasols above the planet; more reliable than fertilising the oceans; and quicker and less demanding on land than planting a trillion trees.

The vacuum cleaners could, says a new overview of emerging options published in February by Oscar Rueda of Leiden University in the Netherlands, be the least bad option.

The world is on a perilous course, climate scientists agree. The atmosphere has already warmed by 1C from pre-industrial levels. The 2015 Paris Agreement set a target to keep the increase below 2C and as near to 1.5C as possible. But the UN’s Intergovernmental Panel on Climate Change says it is already too late to limit warming to 1.5C by eliminating new carbon emissions alone. It will inevitably require some form of planetary “geoengineering” later this century.

Technologists have been discussing the options for a while. This author attended a conference on the topic at Oxford University as long ago as the early 1990s. An early favoured climate fix, which continues to be discussed, is to leave the CO2 in the atmosphere and keep us cool by shielding the Earth from the sun’s heat. Ideas have included giant parasols in space, filling the upper atmosphere with sulphate particles to scatter solar radiation, seeding clouds to make them brighter, and covering the oceans with floating golf balls.

But such plans have fallen out of favour because the side-effects would be huge. The continued build-up of CO2 would wreck ecosystems, acidify the oceans and cool the stratosphere, tearing holes in the ozone layer. So Plan B from geo-engineers has been to find ways to remove CO2 from the air.

So-called negative emissions technologies (NETs) have gone mainstream among climate scientists. They mostly hate the idea of re-engineering the planet to control temperatures, but they fear the effects of rising temperatures even more.

A study by the Royal Society in London two years ago estimated that limiting warming to 1.5C would require capturing about 810 billion tonnes of CO2 by the end of the century – the equivalent of about 20 years of current emissions. Other estimates – with different assumptions about how fast we can stop putting CO2 into the air – range from 150 billion tonnes to 1,180 billion tonnes. The big question was how best to do it.

One old idea is to fertilise the oceans with iron or nitrogen to stimulate algae growth that would suck CO2 from the air. Some British scientists tried out spraying the remote Southern Ocean with iron filings. It seemed to work, with “blooms” of algae growing in their wake. But nobody knows yet if it would have a lasting effect. 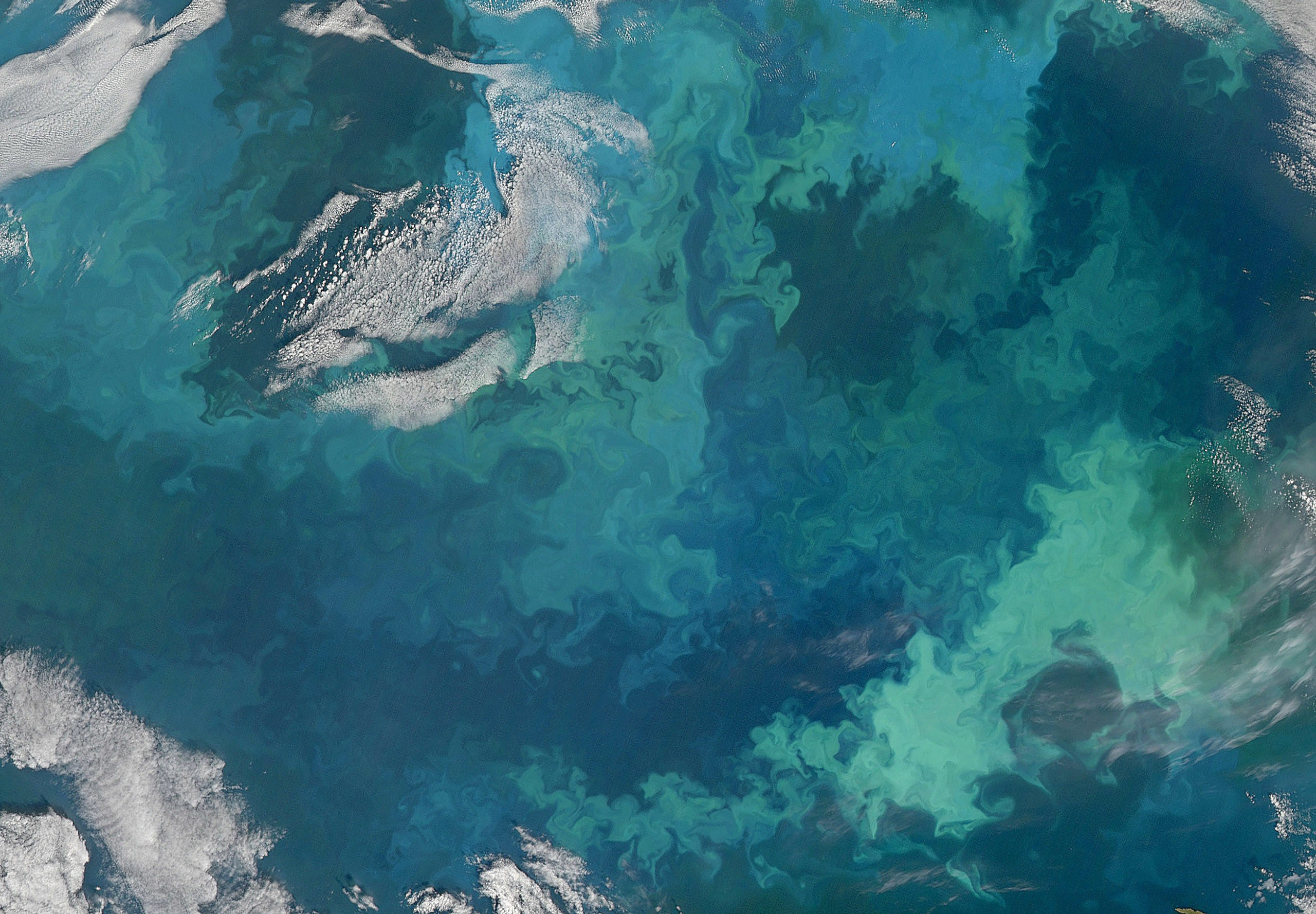 Phytoplankton blooms in the Barents Sea. Iron could possibly be used to stimulate the growth of algae, trapping CO2 through photosynthesis. (Image: Norman Kuring / NASA) 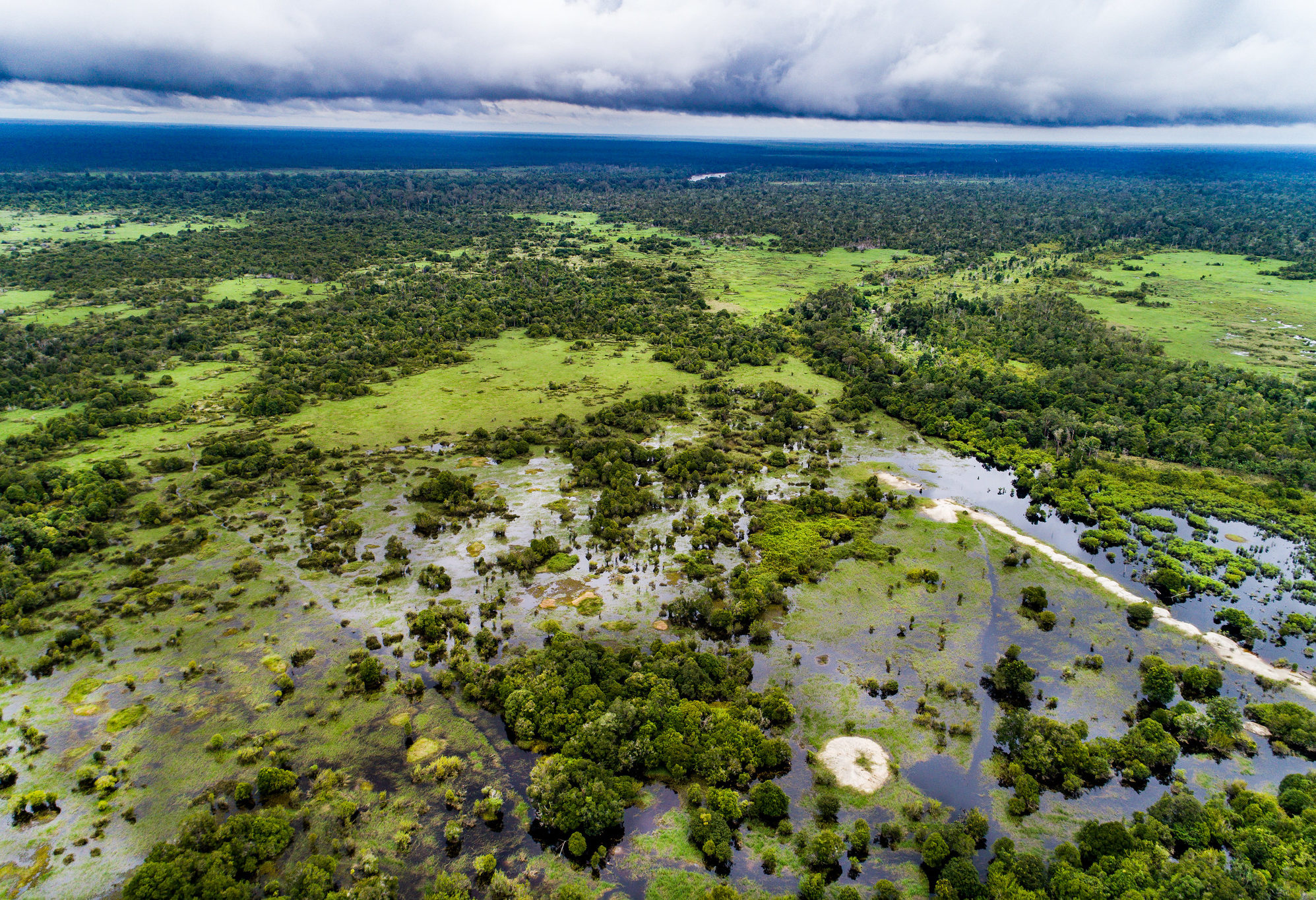 Wetland soils, like this peatland forest in Indonesia, are carbon sinks. Their protection and restoration can capture huge amounts of CO2. (Image: Nanang Sujana / CIFOR, CC BY NC ND)

So next up is encouraging the land to absorb more CO2. Soils could help. They contain carbon and can be encouraged to contain more. Less ploughing, smarter livestock grazing, creating and restoring wetlands all help. And they make ecological and agricultural sense too, so that is a win-win. Burying charcoal – partially burnt wood – could make things happen faster. But overall, the climate effects would be slow, and both organising and measuring the effects would be difficult, says Rueda. So soil-carbon sequestration, as it is known, is worth encouraging but not relying on.

Another approach is to speed up weathering of rocks. Wind and water weather rocks to make soils. As they erode, they release chemicals that react with CO2. So more weathering takes more CO2 out of the air. That could be achieved by spreading the land with some fast-weathering rock. The ideal candidate, Olaf Schuiling of Utrecht University has long argued, is olivine, a common mineral mined for metal-working. Schuiling says that a tonne of olivine will capture a little over a tonne of CO2 for as little as $13.

The most obvious way to capture lots more carbon on land is more trees – to undo centuries of deforestation. A study by The Nature Conservancy reckoned that around 700 million hectares of formerly forested land worldwide are not currently used for agricultural or human settlements and could grow enough trees to eventually absorb seven years of current CO2 emissions. Hence the idea, launched at the 2019 World Economic Forum in Davos, to plant a trillion trees.

A supercharged version of reforestation has risen to the top of the geo-engineers agenda in the past decade. It is called BECCS, for Bioenergy with Carbon Capture and Storage. It combines planting trees or other crops to burn as fuel in power stations with capturing the CO2 emissions from power station chimneys and burying it underground – probably in old coal mines or oil wells. (The Royal Society puts storage capacity worldwide at enough for 900 billion tonnes of CO2, coincidentally just above the 810 billion tonnes it says we may need to remove from the air this century.)

The trees cut down to burn would be replaced by new ones to suck more CO2 from the air. It sounds like the ultimate answer: the reverse of what happens now. The more you burn, the more CO2 you can take out of the air. The IPCC’s 2014 climate assessment concluded that keeping below 2C would require “the widespread deployment of BECCS”.

But there has been a lot of pushback. Wildfires could consume the new BECCS forests – or climate change could kill them. Trees grow slowly, and land is already precious. The vast scale of reforestation required would cause rampant land grabbing and could threaten global food supplies. And there would be little room for biodiversity on Planet BECCS, the Royal Society concluded.

Planting trees may have a role, but now seems unlikely to do the job on the scale and in the time required. So now rising to the top of the agenda is the idea of giving the job to engineers. For BECCS, read DACCS: direct air carbon capture and storage. This would stick with the technology of burying captured CO2 underground but use chemistry rather than biology to do the capturing.

A range of chemicals would do the job. Amines and sodium hydroxide are most discussed. One idea would cover the planet with millions of “artificial trees”, which would have large surface areas covered in the chemicals that would absorb CO2. But that could take up as much land as planting real trees. Better might be “vacuum cleaners” that actively suck in the air. They would require lots of energy that would need to be generated without emitting CO2 or the gains would immediately be lost. But they would need much less land.

First suggested in 1995 by Klaus Lackner, now at Arizona State University, this idea was long seen as outlandish and ludicrously expensive, potentially costing hundreds of trillions of dollars. But, like the price of wind turbines and solar panels, the predicted costs of the giant vacuum cleaners keep coming down. Two years ago, a study for the journal Joule by David Keith of Harvard put the cost, including burying the CO2, at US$232 per tonne.

“There’s been very rapid progress,” said Stephen Pacala of Princeton University in a recent interview. “So much so that that knowledgeable people who are not starry eyed, but just hard headed, believe there is a high probability that a research effort within 10 years would produce direct air capture at $100 a tonne.”

If the world sets a price for putting CO2 into the air at $100 per tonne, as envisaged by the Royal Society, then it would be game on. Rueda certainly thinks so. After a thorough review of available NETs technologies, he concluded that “DACCS emerges as the most attractive”. According to him, it is highly effective, highly feasible both technically and politically, has low side-effects provided there is plenty of renewable energy to power it, delivers permanent storage, and has the largest potential.

Rueda suggests combining DACCS with reforesting and soil-carbon sequestration, both of which are cheap, available now and ecologically and agriculturally beneficial. BECCS, till recently the darling of climate scientists, comes only fourth on his list. For many, this approach to fixing the world’s greatest environmental problem seems appalling. It is very much second best to preventing emissions. But right now, every year we are putting into the atmosphere another 40 billion tonnes of CO2 that will one day have to be removed again. Whatever the cost.

This article written by Fred Pearce was first published on China Dialogue at this link.