Palm oil is a versatile and ubiquitous ingredient, found in several products we consume on a daily basis, like instant noodles, biscuits and cosmetics. But the sustainability of such products has been questioned by many civil society organisations, which have linked unsustainable palm oil production to devastating habitat and wildlife losses around the world. This includes international wildlife charity ZSL (Zoological Society of London), which runs conservation projects in more than 50 countries, including SPOTT – an online platform that assesses the transparency of the world’s most significant palm oil companies.

Palm oil is consumed throughout the world, with five regions consuming more than half of the 70 million tonnes produced annually – namely Indonesia, India, the European Union, China and Malaysia. 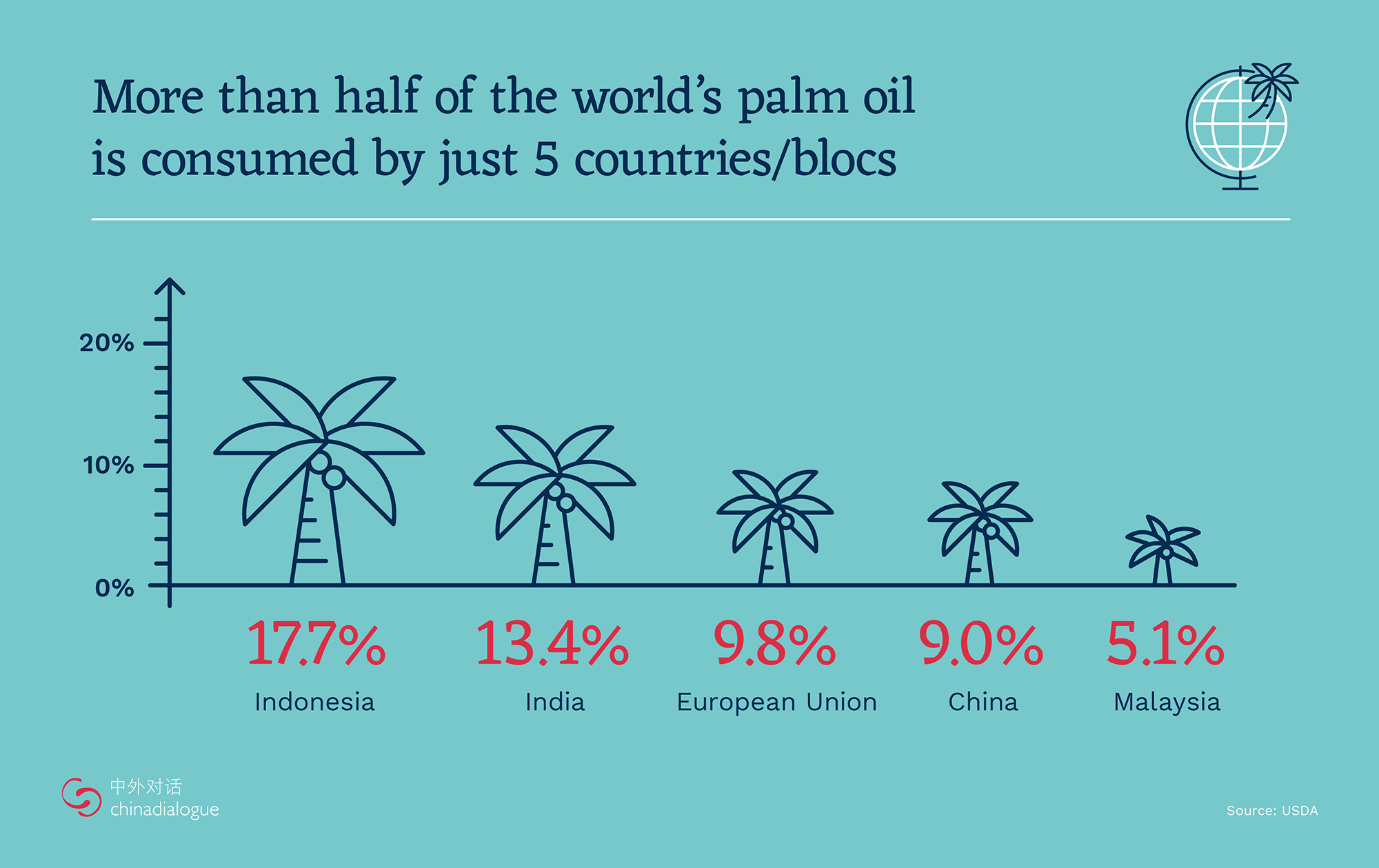 In 2019, China imported more than 6.3 million tonnes of palm oil – roughly 9% of global supply – representing more than half of the country’s imports of edible oils. Much of this palm oil is imported from Malaysia and Indonesia, which together produce more than 85% of the world’s palm oil.

The use of unsustainable or “conventional” palm oil – that negatively impacts both natural environments and local communities – is commonplace in China. At present, less than 1% of palm oil consumed in China is classified as sustainable. 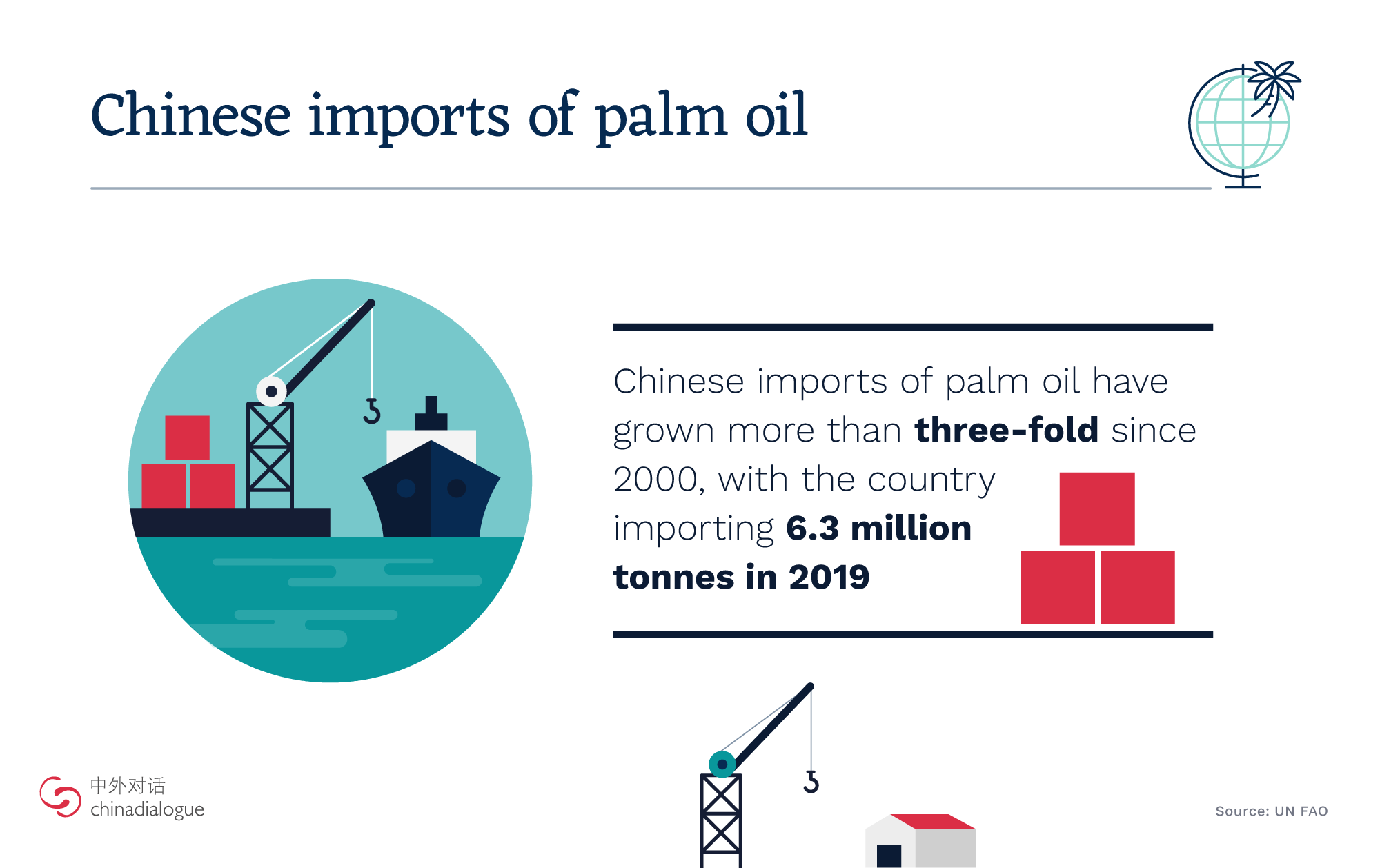 The rapid growth of the palm oil sector – much of it through conventional production – has fuelled large-scale deforestation in some of the world’s most biodiverse places. In 2018, approximately 3.6 million hectares of primary forest were cleared – an area roughly the size of Belgium. This clearance is not only linked to palm oil expansion, but is driven by a multitude of factors, with agricultural production – particularly for cattle, soy, timber and palm oil – being a dominant cause. Large-scale forest loss resulting from the production of conventional palm oil not only contributes to climate change and biodiversity loss, but also impacts the livelihoods of local communities.

Forests are vital for mitigating climate change as they sequester and store vast amounts of carbon. These habitats are also home to several species such as the Bornean orangutan and Sumatran tiger, both of which are currently listed as critically endangered on the IUCN “red list”, with oil palm expansion seen as a key factor in their decline.

Habitat loss from agriculture not only results in direct wildlife casualties, but can also drive wildlife into human settlements, increasing human–wildlife conflict and fuelling illegal hunting. Forests, peatlands and other habitats also provide local communities with access to clean water, subsistence crops and non-timber forest products, among other economic opportunities. These are all impacted when forests are cleared to produce goods that we regularly consume.

The negative consequences of palm oil production have prompted action by civil society organisations, governments, businesses and consumers to improve the sustainability of palm oil. Many critics, particularly in Europe and North America, have promoted large-scale palm oil boycotts and a switch to other vegetable oil crops. This includes recent action by Iceland, a UK supermarket chain, to remove palm oil from all their own-brand products, as well as action by UK online supermarket Ocado to offer the first “palm oil-free” shopping aisle.

Commitments to go “palm-oil free” may seem positive, but in reality may drive greater deforestation and biodiversity loss as companies switch to less efficient vegetable oils.

Palm oil is favoured by companies due to both its versatility and high efficiency. One tonne can be produced on as little as one-eighth of the land needed for soybean, sunflower and rapeseed oils. Given that demand for palm oil is expected to nearly double by 2050, substituting oil palm for other crops may exacerbate the problem. 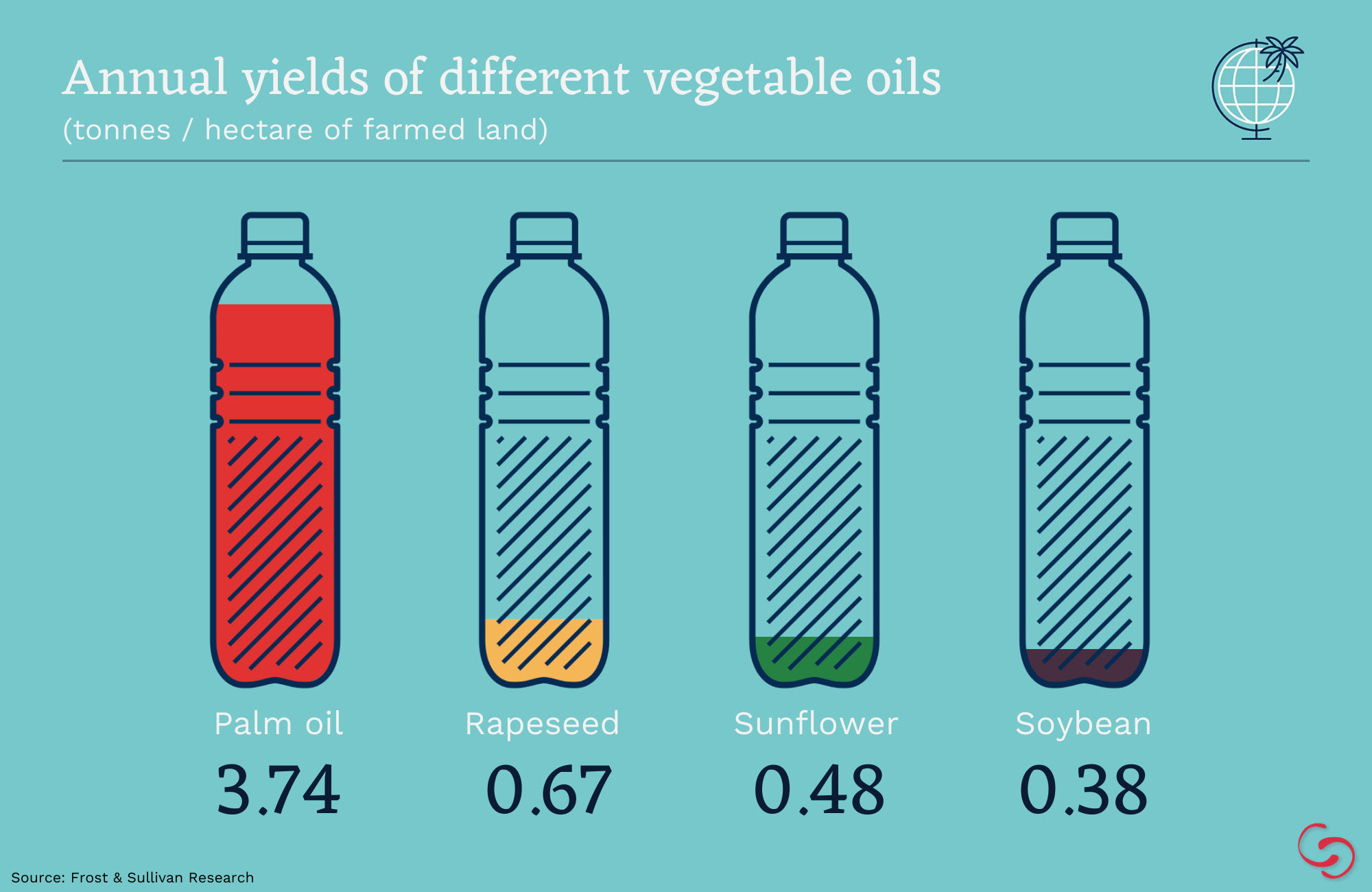 Campaigns to boycott palm oil remove incentives for companies to improve their production practices, as demand for palm oil by consumers in western markets decreases, and companies continue to sell conventional palm oil to less scrupulous markets. A switch to sustainably produced palm oil is a solution favoured by several civil society organisations.

Sustainable palm oil is produced using the best available social and environmental practices, while also being economically viable for the companies that produce and purchase it. Numerous companies have shown that palm oil can be produced sustainably – free from forest clearance, biodiversity loss and the exploitation of workers and local communities, while at the same time bringing positive economic returns to businesses and local economies.

Numerous voluntary certification schemes currently exist to guide the production of sustainable palm oil, with the Roundtable on Sustainable Palm Oil (RSPO) being the most recognised and robust standard currently available. This standard defines strict criteria companies must follow for palm oil they produce to be certified, including the protection of forests, biodiversity, workers and indigenous peoples.

At present, nearly one-fifth of the world’s palm oil is RSPO-certified, most of which is exported to Europe and North America. The low uptake of sustainable palm oil in the global market is largely due to the complexity of supply chains, high cost of production and low consumer demand. However, given that Indonesia, India, China and Malaysia collectively make up more than 45% of global consumption, transitioning these markets to sustainable palm oil presents a significant opportunity to improve the sustainability of the sector as a whole. This requires collective action both by companies to use sustainable palm oil in their products and by consumers to favour companies that do so.

Chinese membership within the RSPO has surged in the last few years, with companies such as Shanghai Jiawang Food and Jiahua Chemicals joining in the past year. Initiatives such as the China Sustainable Palm Oil Alliance have also recently launched, providing platforms for collective action and opportunities to raise awareness of the importance of transitioning towards sustainable palm oil.

Collectively we have a shared responsibility to shift towards more sustainable production patterns. Even a small shift in consumption patterns in countries such as China can have lasting impacts on communities and landscapes where palm oil is grown. We must all work together to support a more positive and sustainable future.